This article was originally published on The Cannigma, and appears here with permission.

In Egypt, medical cannabis use goes back for millennia.

And while many different early cultures cultivated cannabis, the ancient Egyptians exemplified a truly holistic use of the plant. It’s even possible that cannabis — Egyptian hieroglyphs called it shemshemet — became popular before the great pyramids were built.

Egypt’s historical use of shemshemet appears twofold. On one hand hemp may have been used for fiber and textile; on the other hand, the more psychoactive components of cannabis may have been used medicinally. Though many sources today appear authoritative in their claims that the ancient Egyptians used hemp for this and cannabis for that, a closer inspection of the evidence is needed.

Let’s take a trip back through Egyptian history, beginning around the year 3,000 BC.

Cannabis Hints in the Historical Record 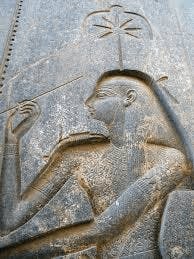 While the exact timeline is less than crystal clear, cannabis was likely used in ancient Egypt as many as 5,000 years ago. Some speculate that depictions of the Egyptian Goddess of writing, Sheshat, are brimming with cannabis-inspired themes. In many paintings, she’s shown with a star-shaped leaf atop her head and a fibrous rope in her hand. Was Sheshat’s creative ability courtesy of some help from hemp? It’s a fun theory, but let’s move on to more evidence-based examples.

First, it’s important to understand the context in which Egyptian medicine found itself. The culture’s understanding of the human body was far ahead of its time, and, relatively speaking, extraordinarily advanced. Although the ancient Egyptians preceded Pasteur’s germ theory by thousands of years, they nonetheless placed a great value on cleanliness and sanitation. And customs like embalming added to the Egyptian’s understanding of how the human body worked.

This same medical knowledge lent itself to the extensive use of medicinal plants. At first, this usage blurred the lines — merged them, even — between science and religion. As Egyptologist Barbara Watterson notes, “the earliest ‘doctor’ was a magician, for the Egyptians believed that disease and sickness were caused by an evil force entering the body.” Thankfully, plant-based incantations seemed to be a perfect cure.

Soon enough, cannabis was discovered as among the best and most powerful of these plant-based preparations. Its dual psychotropic and healing properties likely made cannabis popular among the dual doctor-magicians of ancient times. And while it’s unclear exactly when cannabis use became mainstream, the plant’s residue has been found in Egyptian artifacts dating back to more than 4,000 years ago.