Fines in California for Illegal Sellers Rise to $30K per dayPosted by MMP Connect SupportOn July 28, 2020 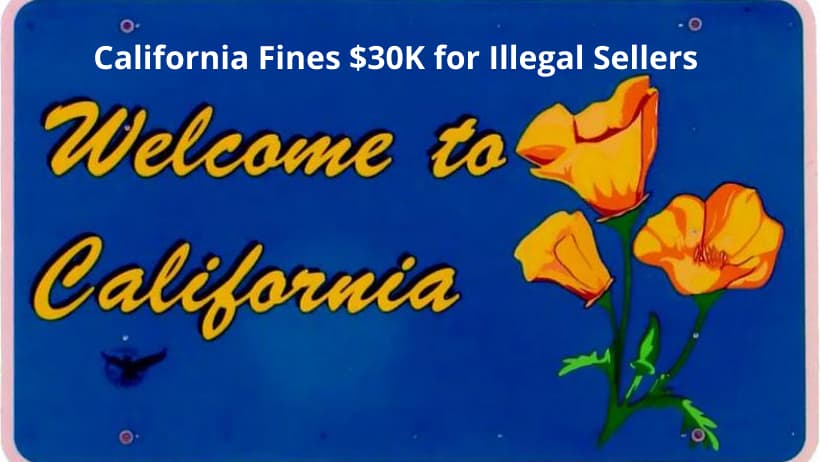 Fines in California for illegal sellers rise to unprecedented levels. Despite the increasing maturity of the legal cannabis market, several major challenges remain for the industry. One of these is the ongoing activities of illegal cannabis sellers. In California, legitimate retailers are about to get some help with this from their state government. Lawmakers have unanimously passed a law that raises the fines for illegal cannabis sales.

It seems that some lawmakers in the state have finally recognized the social benefits of a well-regulated cannabis market, and the health benefits of CBD. But even after the passing of the recent law. Legitimate cannabis businesses in the state still face a fragmented, confusing, inconsistent system for licensing.

The proposal to raise the fines imposed on unlicensed cannabis retailers in California has stemmed from a simple realization. Assemblywoman Blanca Rubio (D-Baldwin Park), who proposed the bill. Said she introduced it out of concern. That as much as 80% of the cannabis sold in California comes from the illicit market. This is despite voters approving legal and licensed sales in 2018. And a state-wide effort to crack down on unlicensed sellers.

The bill targets those who provide assistance to illegal pot sellers. Who would face civil fines of up to $30,000 per day. The legislation has been approved unanimously by the state Assembly, and is now pending in the Senate. A final vote on the proposal is expected later this month.

Despite the bill garnering support in the state assembly, it has also created controversy. One business group in the state, the United Cannabis Business Association (UCBA). Was a crucial sponsor of the bill, and encouraged lawmakers to support it. The UCBA argues that licensed cannabis retailers in California struggle to compete with illicit market sellers. Because the latter do not have to pay state taxes or abide by state regulations. And this means that they can charge lower prices.

On the other side of the argument is the California chapter of the National Organization for the Reform of Marijuana Laws. Who claims that the new law is heavy-handed, and that the level of fines it contains is punitive.

In some ways, it’s completely understandable that the state feels that this level of fine is justifiable. The cannabis industry in the state is booming and California was the first to approve it for medical use and one of the first group of 11 states to approve it for adult recreational use.

That said, legal cannabis retailers in the state face a confusing. Inconsistent set of legislation when it comes to securing licenses. Two-thirds of the cities in California do not allow licensing of cannabis businesses, and the law risks penalizing sellers who have made an honest mistake in their applications.

Even where legal retailers are able to secure licenses. Their efforts have been undermined by sites like Weedmaps (a Yelp-like online directory) listing unlicensed sellers, and even by illicit sellers forging documents that claim they are legal.

What It Means for the Industry

For their part, the state of California has claimed that the bill. Is not an attempt to fine companies who make honest mistakes. However, it is true that the recent bill is wide ranging. Because it can potentially be used to level fines on companies. Who promote cannabis companies who they genuinely believe are licensed.

This would potentially include websites who receive advertising revenue from cannabis companies who claim to be licensed. Even landlords who rent shopfronts to companies dealing with cannabis products. It appears, in other words, that the state of California is trying to stamp out illegal cannabis retail. Not by going after illicit sellers themselves, but after those who provide them with business services.

This could be a major problem for the industry. Companies who sell cannabis without the requisite license are, in general, very aware of this fact. Indeed, the fact that some unscrupulous sellers have faked license numbers. Indicates that they are operating with knowingly illegal business practices.

The new bill potentially imposes a heavy burden on companies who deal with these sellers. State lawmakers really expecting landlords to be able to authenticate cannabis retail licenses for all of their tenants? Are we really expecting online portals to police who can legitimately advertise their cannabis products?

In other words, it appears that the state of California is attempting to cut down on illicit cannabis retail. Not by going after those who (wittingly) sell illicit cannabis. But by penalizing those who (largely unwittingly) do business with them. It seems, furthermore, that this point was not fully recognized when the bill was being drafted and voted upon. Because the COVID-19 pandemic has forced legislators meeting in a truncated session. To pare back the number of measures not related to the health crisis.

Only time will tell whether these concerns are justified. Up until recently, enforcement of cannabis retail legislation has been somewhat lenient in California, and the state has focused on seizing illegal grows rather than punishing unlicensed but honest retailers. How long this approach will last. Especially given the amount of money now moving through the cannabis industry in the state. Is difficult to predict, but honest retailers should get ahead of the curve. Making sure they are properly licensed as soon as possible.