In the days before and after Canada’s legalization of recreational cannabis in October 2018, marijuana stocks garnered a lot of attention. However, fewer legal stores than expected, regulatory delays, the illicit market, and other factors challenged legal sales, and the sector suffered huge losses in 2019. The Horizons Marijuana Life Sciences ETF, the industry benchmark, fell 36% over the course of the year.

However, the cannabis sector hasn’t entirely lost its steam. Marijuana was declared an essential item in Canada and many U.S. locales during the coronavirus pandemic, and most U.S. cannabis companies have seen spectacular revenue numbers this year. In general, though, Canadian companies are still facing issues — though one in particular is thriving. Aphria (NASDAQ:APHA) gives you some good reasons to buy.

Contrast this with Aurora Cannabis (NYSE:ACB), which has a spotty history that makes it hard to trust its efforts to recover this year. It has failed to meet its targets many times before. Both These two companies have similar market caps — Aurora at $1.1 billion, Aphria at $1.3 billion — but have a very different approach to business. 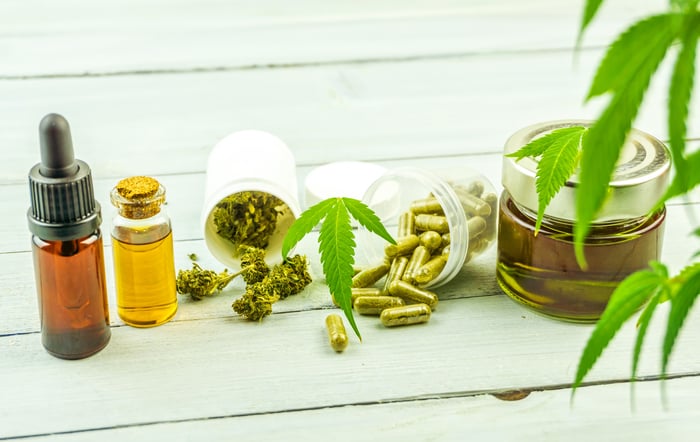 Why Aphria is a good cannabis pick

Aphria cultivates and sells a variety of medical and adult-use cannabis products to consumers under brands like Aphria, Broken Coast, and Good Supply. After Canada legalized cannabis derivative products (vapes, edibles, beverages, and more) in October 2019, Aphria launched its vape products in the market.

Where peers are struggling to make profits, Aphria has seen positive EBITDA (earnings before income, tax, depreciation, and amortization) for five consecutive quarters, including its recent fourth quarter, ended May 31. EBITDA can be a good measure of how efficiently a company is handling its operating expenses, and Aphria’s consolidated adjusted EBITDA in the quarter was up a dazzling 49%, to 8.6 million Canadian dollars, from the year-ago quarter. Consistent hikes in revenue and gross profit were big drivers of this success.

Aphria’s strength in medical and recreational cannabis means high revenues not just in Canada but from international markets. And those revenues are increasing — even though they’re already among the highest in the industry. For fiscal 2020, Aphria’s revenue jumped 129%, to CA$543.3 million, from 2019. Meanwhile, Canopy Growth (NYSE:CGC), with a much larger market cap of $6.9 billion, reported a revenue increase of 76% year over year to CA$399 million for fiscal 2020. Canopy also launched a wide array of vapes, marijuana-infused…