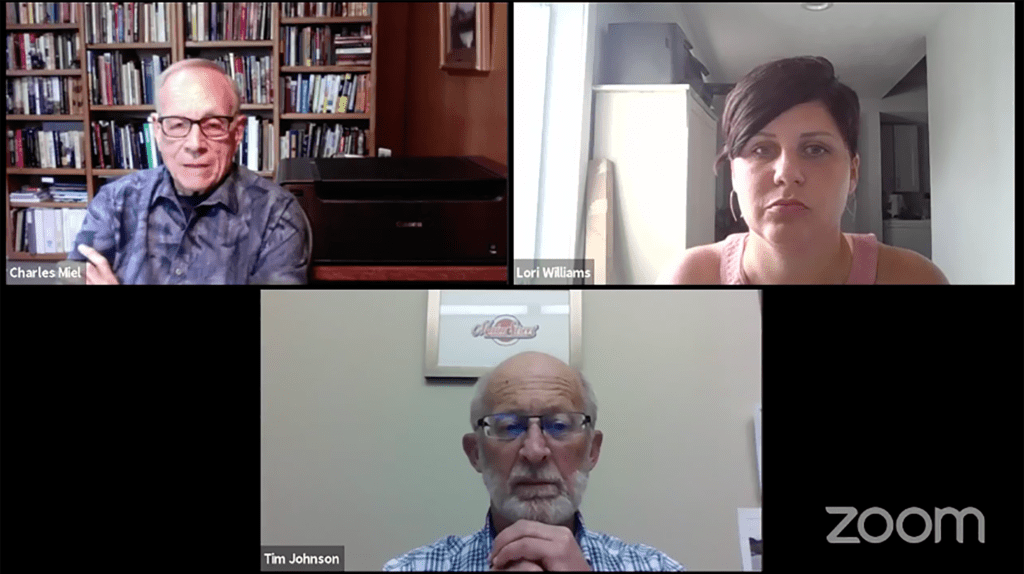 The Stanton Planning Commission met via Zoom to continue discussing regulations to be included on the upcoming proposed marijuana facility ordinance that will be presented to the Stanton City Commission at a later date. Pictured, from top left, are Commissioner Charles Miel, Mayor Lori Williams and Tim Johnson of MainStreet Planning Co. — DN Photo | Brandon Schreur

STANTON — The Stanton Planning Commission is continuing to hammer out the details for a marijuana ordinance draft to be presented to the Stanton City Commission.

Last week, the Planning Commission met for their regular meeting to continue going over the details to be included in the upcoming ordinance that, if approved, would allow for medical and adult-use marijuana facilities within city limits.

In attendance of the meeting was Tim Johnson of MainStreet Planning Co. of Grand Rapids, who was recently approved by the City Commission to assist the Planning Commission in drafting the adult-use portion of the proposed ordinance.

“(The Planning Commission) wants to allow unlimited number of marijuana businesses and will not restrict all types of use,” the letter read in part. “They want to remove all buffering except for a state-mandated buffering for schools. Why would they not buffer city parks, the Fred Meijer Heartland Trail or even Maddie’s Park? Why would they not buffer our churches, daycare facilities and rehab centers?

“Perhaps (the City Commission) should have indicated we’d like to protect our city as much as possible from future litigations considering licensing, nuisances such as traffic and/or crime, odor, property evaluation and equity considerations. There may be other considerations such as discrimination, selective enforcement, favoritism, etc. Make no mistake, there are people that use this new, legal use of marijuana as a money maker — not just by a licensed business, but there are what I call vultures waiting to prey on municipalities that do not have adequate protection.”

Agreeing that many of Holloway’s concerns would be addressed in the proposed ordinance, Johnson asked whether commissioners wanted the City Commission to be the approving authority for granting marijuana facility licenses.

“The only thing is that it’s a sensitive community issue,” Johnson noted. “If you felt that it needed a bit more review and to let the elected officials bear the responsibility of making the final decision rather than the Planning Commission, that’d be one reason to have the City Commission have a final decision on marijuana…

NDLEA, Marwa and the cannabis controversy