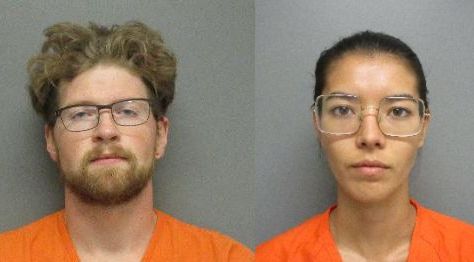 North Platte, Neb. — Troopers with the Nebraska State Patrol (NSP) have arrested two people after locating 60 pounds of marijuana during a traffic stop near Darr.

At approximately 2:25 p.m. Wednesday, a trooper observed a Ford Fusion fail to signal a turn after it exited I-80 at mile marker 231.

During the traffic stop, an NSP K9 detected the presence of a controlled substance coming from inside the vehicle. A search of the vehicle revealed 60 pounds of marijuana contained in bags in the trunk of the vehicle.

The driver, 30 year old Christopher Ryan-Goetze,  and passenger, 24 year old Hannah Umpstead, both of Denver, Colorado, were arrested for possession of marijuana – more than one pound, possession with intent to distribute, and no drug tax stamp.

Both persons were lodged in Dawson County Jail.