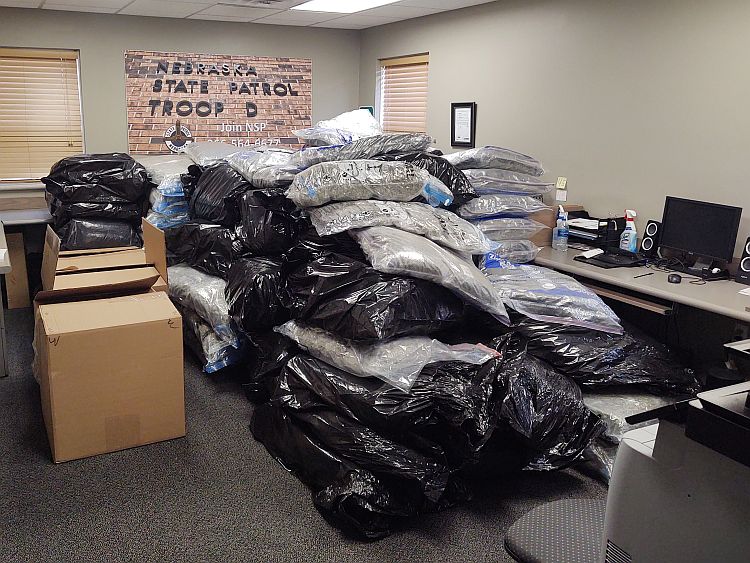 Troopers with the Nebraska State Patrol (NSP) have arrested one person after discovering nearly 2,300 pounds of marijuana during a motorist assist on Interstate 80 in Dawson County.(Courtesy/NSP)

AUGUST 17, 2020 (NORTH PLATTE, NEB.)  — Troopers with the Nebraska State Patrol (NSP) have arrested one person after discovering nearly 2,300 pounds of marijuana during a motorist assist on Interstate 80.

At approximately 1:30 p.m. Saturday, August 15, a trooper noticed a commercial box truck stopped with mechanical problems on the shoulder of eastbound I-80 at mile marker 228, near Cozad. The trooper stopped to assist. During the motorist assist, the trooper became suspicious of criminal activity.

The truck was towed to the NSP office in Lexington for a probable cause search, with assistance from the Dawson County Sheriff’s Office. The search revealed 2,295 pounds of marijuana, which was concealed inside cardboard boxes marked as electronics and other items. The estimated street value of the marijuana is more than $5 million.

The driver, Nolan Baly, 33, of Buckeye, Arizona, was arrested for possession of marijuana – more than one pound, possession with intent to deliver, and no drug tax stamp. Amado was lodged in Dawson County Jail.