Mullah’s regime is paving the path for increasing the prices of gasoline. Shortage of gasoline at pump stations, a 100-liter decrease in the gasoline rations. The state media echoed that a large volume of gasoline is smuggled to neighboring countries. In 2019 nationwide uprising began in Iran following a sudden overnight price hike. Apparently, regime officials have concluded that any increase in the price of basic necessities, such as gasoline and basic foods, has to be carried out with control. 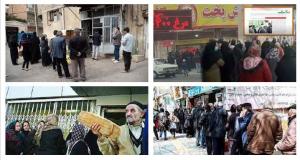 The regime uses tactics to increase the prices of bread as reports from various cities across Iran show long lines outside of bakeries. State-rationed flour being distributed to has decreased and this is a pain to those Iranians who don’t have enough to eat.

Raisi’s claims were so preposterous that the mullahs’ Supreme Leader, Ali Khamenei, was forced to make a public appearance his first in over 40 days to support Raisi in the face of escalating criticism even from the regime’s own officials and state media.

State media are blaming the country’s high death toll due to air pollution, standing at over 21,000 per year, on the…