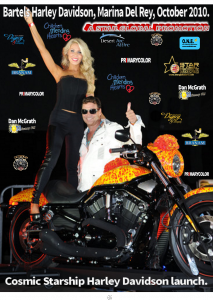 Cosmic Harley Davidson Launched 2010 now back on the market

This is a signature painting and has a price tag of $110 million in the artists latest catalogue.

The Cosmic Harley launched at $1 million sold in 2012 for $3 million and paved the way for the creation by others of multi-million dollar motorcycles.

MARINA DEL REY, CALIFORNIA, UNITED STATES OF AMERICA, October 21, 2020 /EINPresswire.com/ — The Cosmic Starship Harley Davidson Motorcycle is officially 10 Years old today and is currently priced at $35 million. It premiered at a Red Carpet Gala event at Bartels In Marina del Rey, California, in 2010, and was filmed by the world press. As reported in the DuPont Registry , Shelby 50th Anniversary…

US House of Representatives votes to decriminalise marijuana